I walked into the Katakurakan onsen with trepidation clawing up my throat.

A smiling lady handed me a small towel and a small key at the window of reception, then gestured gracefully towards a door on the left. This was something I’d noticed a lot since arriving in Japan; every Japanese person I encountered seemed to have been born with the kind of grace that eludes me on a daily basis. Clutching the towel to my chest, I pushed open the door to the women’s changing room and walked in.

In no way was I excited about getting naked with strangers.

I was dragging my feet with dread. My skin had started to itch with a strange, cold, prickling sensation that wasn’t in the least bit pleasant. It hadn’t been my idea to visit the onsen, but the lovely Japanese man showing me around Lake Suwa had seemed personally affronted when I said I would rather not. His smiling, insistent head-bowing had worn me down until, resigned, I had nodded and followed him into the brick building.

According to Wikipedia “an onsen is a Japanese hot spring and the bathing facilities and inns frequently situated around them. As a volcanically active country, Japan has thousands of onsens scattered throughout all of its major islands. Onsens were traditionally used as public bathing places and today play a central role in Japanese domestic tourism.”

I knew very little about onsen before visiting, other than the fact that you have to be naked and tattoos are strictly verboten. Now here I was, standing in a changing room, clutching a towel, wishing the tiled floor would open up and swallow me whole.

Once I’d accepted that this was, in fact, happening, I looked around for any hint as to what was expected of me. I knew that I would have to strip down, but where? Here? Signs in unintelligibly bubbly kanji laughed at me from the walls. Trying to act nonchalant, I sat down and started to untie my shoelaces ever so slowly as panic bubbled up in my chest. Nobody there spoke any English, and I sincerely doubted my rudimentary phrases of Japanese (O-genki desu ka? Sumimasen! Kore kudasai) would get me very far in learning the intricacies of onsen ettiquette.

Just then, the door swung open and, as if sent to deliver me to salvation, a middle-aged lady walked in. She might as well have arrived in a beam of light, I was so glad to see her. I watched her out of my peripheral vision as I pretended to be absorbed by the process of peeling off my socks. I could undress myself – that part didn’t present a problem; after all I’ve been doing it every day of my life – but I needed to know what came after. I didn’t want to have to stand there naked like a total gom while I fumbled to understand what to do next.

The woman, unaware that she was the hero of the moment, kicked off her running shoes and started to briskly remove her clothing. I kept my eyes on the bench as she dropped her blouse, her bra, and her bobby pins into a tidy pile on the pale ash slats. I picked up the pace with my own clothes, pulling off my loose knit jumper and tank top in a single movement. Now that I had found this unwitting guide, it was important I keep up with her. I couldn’t let her disappear from view.

When she was quite nude, she put her belongings in a locker.

I also put my belongings in a locker.

She used her key to lock it, then slid the elastic keyring onto her wrist.

I did the same.

Picking up her towel, still ignorant of my careful observation of her every move, she walked through the changing room and passed under an arch into the room with the main bath. I followed, now so intent on following this poor woman like a creepy stalker that I barely registered how weird it felt to be totally naked around perfect strangers.

It was weird. It was very weird. I have a somewhat strange notion about my body in that I’m okay with showing it off to an extent – I feel comfortable in a bikini, and don’t mind changing in front of people if the situation demands it – but I don’t like getting completely naked in front of anyone who isn’t my partner. It’s a personal thing. I’d just rather not share the sight of my entirely unclothed body with anyone else. Make of that what you will. It’s not a matter of prudishness or shame or discomfort with my body… It’s just a personal preference.

I never said it made sense.

So here I was, standing in a room in Japan decorated to look like an ancient Roman bathhouse, stark naked, holding only a small towel and trying not to stare at anybody.

…Which, I mean, if I’m going to be naked around strangers anywhere, Japan is probably far enough away for it to almost not have happened at all.

My mentor turned to an area on the right, and sat on the tiniest stool I have ever seen. The stool was positioned in front of a little washing station, with toiletries on a similarly tiny counter. I followed her lead and sat two tiny stools down, with my knees up around my chest. I watched her surreptitiously as she used the shower head provided to wash herself, and copied her movements while wondering why the uncomfortably tiny stool was necessary. What was wrong with a shower cubicle? 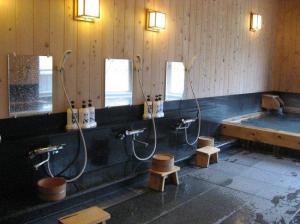 When she stood and made her way to the bath, I followed a couple of minutes behind. I walked to the far end of the bath and stepped into the warm water trying to look as unperturbed as possible. When my whole body was submerged in the warm water, I folded my towel and placed it on a ledge just like my onsen angel had done, and then I lay back, closed my eyes, and tried to stop thinking.

Basically what I’m trying to say is that my mindful meditation didn’t last very long.

I opened my eyes to see my onsen guide walking along the bottom of the bath. I stretched my leg out and felt around with my toes. I was surprised to find that there were thousands of small pebbles lining the floor of the bath. I slid down a step so that my chin was barely above water, and pressed the soles of my feet into the pebbles. It felt good. I could see why people loved the onsen. The water was exactly the right temperature; not too hot to step into without wincing, and not too cold to lie there for an extended period of time. It was quiet. The few women in the room were absorbed in their own rituals, washing and relaxing and combing out their hair. I’d never been in an all-female space like this before, and it felt very safe.

I soaked there until my fingertips wrinkled.

Afterwards I stepped out to find my onsen lady getting dressed. Apparently it’s good to keep the minerals from the onsen spring water on your skin, so it’s normal not to shower after your soak in the bath. I pulled my clothes back on with no small sense of relief, and emerged into the cool air with a pink, flushed face and a new appreciation for onsen culture.

I feel like maybe after a couple of visits I might have managed to feel comfortable with the whole thing (although my brother told me he had to go to one with his coworkers and even just typing that sentence out now makes me incredibly uneasy, so who knows?). I’m glad I did it at least once, anyhow.

Have you ever been to an onsen? If not, would you try it?

And the real question… WOULD YOU TRY IT WITH YOUR COWORKERS?

68 thoughts on “Stripping Off in Suwa, Japan”