I am actually in Mexico as I type this, and I’m typing it on my phone, at the bar. I’ve had one Bahama Mama and one Electric Lemonade, and if you know me then you know that’s quite enough to have me enthusiastically humming Disney villain songs loudly and in public.*

It’s nice here. I arrived a few hours ago and already my hair has taken on a life of its own and doubled in volume; it looks like it inhaled deeply and never exhaled. Waves have appeared out of nowhere. It is basically now a duvet for my head and shoulders. I have considered shaving it off about three times since the plane landed.

Today (tomorrow) is Monday, but I’m typing this on Sunday (today) because I am functioning on about four hours of sleep and trying to untangle time zones is beyond the scope of my capabilities right now. The Bahama Mama didn’t help. The Electric Lemonade was the nail in the coffin. I’m getting ready for a Mudslide and honestly, once I’ve had it I’ll probably have to ride a giant iguana back to my room because three cocktails is enough to have me talking to the walls.

The bartender keeps calling me Emma, which makes me feel like I’m an incredibly unprofessional undercover agent. Is Emma supposed to be drinking something that tastes like melted lime Calippo? Is she supposed to be sitting on a swing? Are swings even safe in a bar? I feel like this is a head injury waiting to happen.

Today my Falling Half In Love With Strangers post is being featured on Discover WordPress, which is exciting and lovely and flattering and nerve-wracking all at the same time.

*Yes I also do this – regularly – completely sober. Stop judging me.

29 thoughts on “Thoughts on… Spending Monday in Mexico” 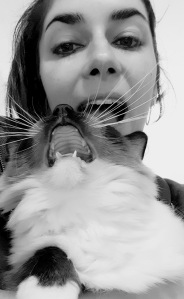